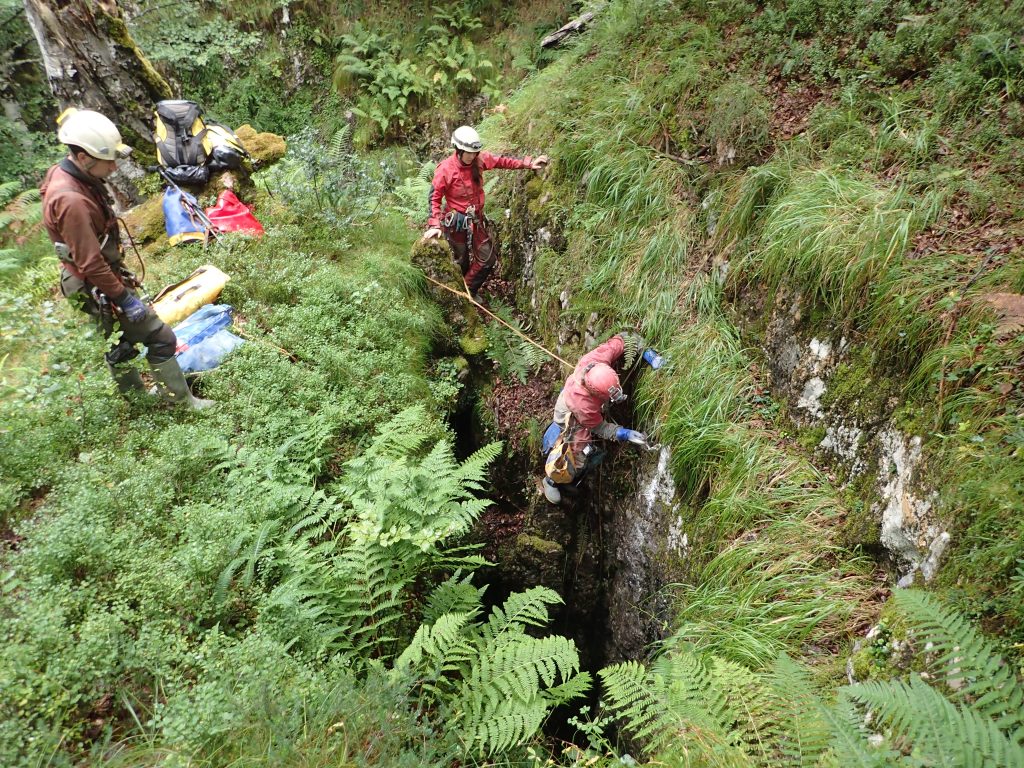 In the early 1970’s a group of students from Lancaster University Speleological Society (LUSS) touring Northern Spain heard about some caves near Tresviso, Eastern Picos de Europa.  In 1975, their first year visiting caves of Tresviso, they explored upstream, into the Sobra valley and found a crack in the side of a cliff that is Cueva de Marniosa.  They explored this cave down a few pitches and along some well decorated fossil passage to a high rifty passage with a small streamway in the bottom. Over a kilometre upstream, the streamway ends at the impressive Hall of the Mountain King chamber- a 50 m x 20 m chamber with a height of over 50 m.  The whole cave has a length of 5 km and a depth of 290 m.  Over the next 40 years a few extra bits were added, but other caves in the area were more interesting.

During the summer expedition of 2018 a small group were tasked with surface prospecting in the brambles, bracken and beech at the head of the Sobra valley and found a number of surface shafts. One of the surface shafts, Cueva del la Silvestre, descended a series of pitches to an impressive large 45 m deep, 20 m diameter shaft.  From the bottom of this shaft several ways on were found.  A few days later, on the final day of the expedition, more pitches and climbs were descended and a message from the past was found: LUSS.  A short walk upstream and the explorers entered Hall of the Mountain King.  Much to the chagrin of those involved the 500 m deep traverse of Silvestre to Marniosa would have to wait until next year…

We got to the Silvestre layby at about 11am, kitted up and started walking down the track. This time round it was a lot easier to find having been well travelled. Stu’s white tape on silver birch trees was not so great in the day light as it had been the night before. Whilst we were doing the through trip, Joe and Rob where diving the sumps in Wet Willy and had stolen Alastair for the day to carry for them. As Stu and I weren’t carrying much we took two of their bags down for them (on the basis that Rob would later repay us with a create of beer, but failing that, dancing bear coffee liquor).

The Silvestre entrance had been rigged the day before down to waterfall chamber, where Bob needed to re-bolt before we continued on with the through trip, so Bob and Arwel headed in whilst the rest of us followed behind. The day before Stu had found the jaw of what we think is horse, to match the skull he’d found the year before. Now Bingo (see photo for scale) lives happily in the entrance chamber.

Following through the rest of the cave, Rob who hadn’t been in the cave before grew increasingly more impressed at the fact that it was indeed a cave. We took our time marvelling at the finest bolder I’ve ever seen that sat in the middle of the stream way and is a conglomerate, at first I assumed it was originally the floor of the streamway and had been eroded away, but not all that convinced, think it might just be a boulder.

When we reached Bob an Arwel, there was a short wait for the bolting to be finished before we could reach the bottom of waterfall pitch
When everyone was down waterfall pitch we left the diving team and their bags and continued on. From waterfall chamber we continued up the aided climb and through into old stream way rift passage. This continued on (picture below), getting slightly small in places (for Bob and Stu) and down climbs and eventully leads to a junction, left being the way on and right being Hall of the MountainKing.

As Stu and I hadn’t been before we went to Hall of the Mountain King which is an aven roughly 50m in height and 20m width, with a mud slope to the left of the chamber and 2 water inlets coming in through the aven above to the right. Here was where we stopped to take a group photo.

From Hall of the Mountain King back to the Silvestre junction we followed the stream and continued down the active passage way. The passage follows onward with multiple down climbs, some more exposed than others. Eventually the passage follows a fault and here the bolder choke began. Alastair Gott had been in Marniosa the day before and placed reflectors along the bolder choke which were extremely helpful and saved a lot of time as there are multiple ways along the choke in which you can go wrong. When the choke ends, the passage re-joins into stream way and this follows straight towards the bottom pitch of Marniosa

We headed up the muddy pitch out of the streamway, where Bob showed us “the boulder” which must not be touched or moved in anyway as it was wedged right between the wall and multiple boulders which became the false floor of the next slope.
Following this onwards the passage is very well decorated series of chambers (see photos), with various calcite flow slopes and formations, including this flying pizza like disc thing… Eventually reaching the bottom of a 22 m pitch. From here there’s 3 more small pitches until eventually you get into the old cheese chamber and we were at the Marniosa entrance. The trip in total took 6 hours and we got out with plenty of time to spend in the bar drinking celebratory beers and eating local cheese. Rob and Joe eventually turned up and kept the promise of buying Stu and I a dancing bear coffee liquor.