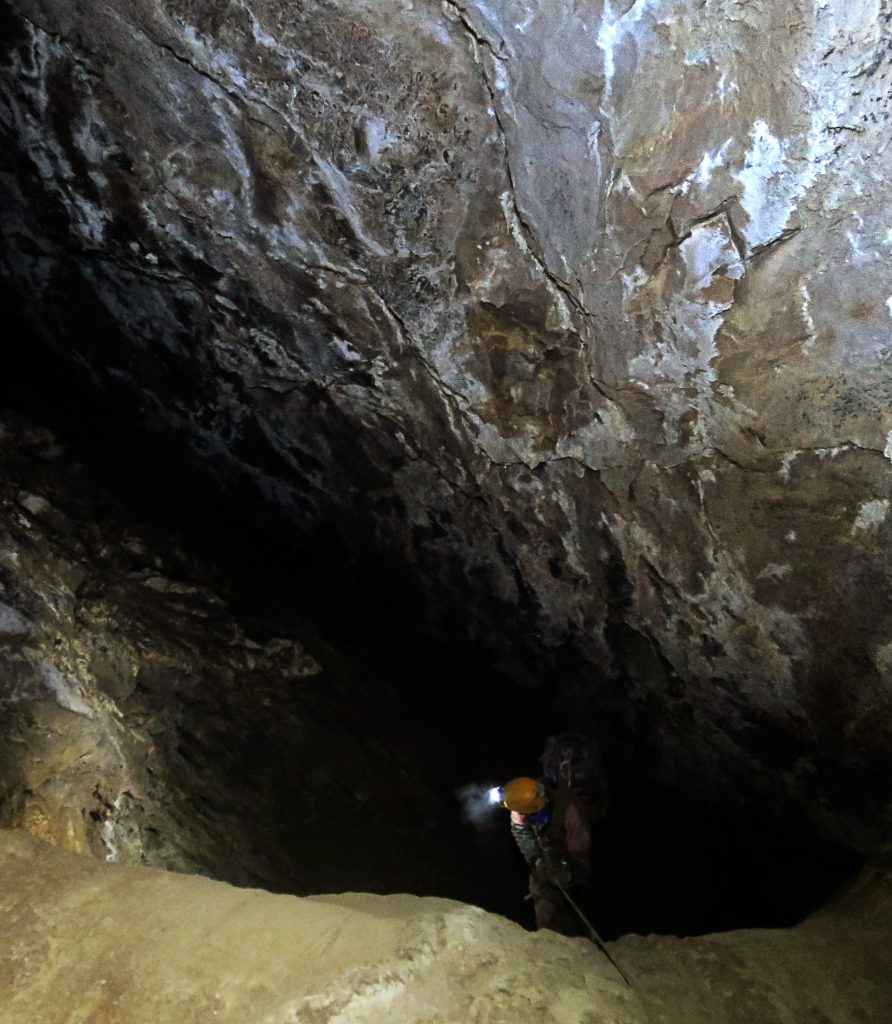 A surprisingly comfortable nights sleep was had by everyone, the new sleeping bags, although cheap, proving to work quite well.  The temperature of the chamber was around 7 degrees all night, which helps.  A lot warmer than other camps in the cave.

Over muesli some debate was had on whether to explore a bit of new passage, near camp (Joe’s Crack) but ultimately we decided to strike camp with a view to get out in time for the bar and guarantee a full Monday for any other plans.

Camp equipment was catalogued, packed and stored ready for July and then we started the long slog out of the cave, with three lightly packed bags between the five people (2pm). We gradually split into smaller groups, myself and Gareth at the front, for all of 20 minutes until we got slightly lost in a boulder choke.  Hannah soon turned up and pointed out the obvious way on.

The way down the ramps is a lot quicker and we arrived back at The Hall of the Green Domino in just over an hour.  BJ had some cheese and chorizo wraps stashed here, which was a nice boost over the rather bland muesli earlier.  Once up the muddy pitches into Dan’s Big Room the cave seems to feel it’s going downhill, so a further boost to morale.  Consort Hall is the next major stop and we all reconvene.  All we are making good progress there is rising concern that we won’t make it out to the bar in time for dinner.  Myself and BJ attempt to race ahead but are soon caught up by Chris at Flake Pitch who then runs off to get dinner in, and BJ not far behind him.

While waiting for my turn up the pitch, Hannah turns up, having fallen and possibly twisted her ankle, is now approaching my preferred caving speed….  We cave for a bit, with me still running behind and upon reaching the Sump, realise we haven’t  seen or heard from Gareth in a while. I move onto the next awkward bag obstacle while Hannah waits for Gareth.  It’s not long before they both arrive and we get the bags through the Hole in the Wall.  Gareth had gone the wrong way down a pitch and had a slight fall, hence slight delay.

My entire body is cramping at the moment but I know it’s nearly all over.  A few more abseils lead back to the big 22m up pitch ( needs a name!) and then back into Boulder Hall.  It’s all down hill from here, down the ramp and into the entrance series.  Exit at 8:00pm.

Only an hours hike up the gorge left to complete………