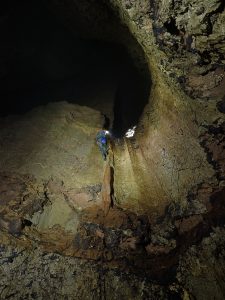 An early start was arranged, which would normally mean an early night. 2am was the actual bedtime for most on the trip. The agreed start time of 9am was fairly well stuck to and saw us at the cave by 9.45am. Upon arrival at the track, AG decided to put his caving kit on and walk down. As we walked away the shout of ‘Oh no, these aren’t my wetsuit socks!’. Bob cast his sceptical eye over the previous days rigging and gave it a rating of ‘Misplaced, must try harder’. In actual fact the bolting was fine and the rigging was good, but we thought we may need any extra rope lower down and not around the entrance. Bob re-rigged with Jason following ready to add a bolt to the next rope and continue. Kelda then followed on to mark the survey points, Stu followed with the Disto and Alistair brought up the rear with a PDA to draw up. This was working well, until the request for more rope came fairly quickly in order to rig more economically. The survey team quickly caught the rigging team who were discussing the best way to rig with some less than inspiring rock to go at, whilst crucially staying dry! This pitch dropped us about 15m (see survey) into a large chamber. Onwards from here we continued through a selection of boulder slopes and short pitches which brought us into some large clean washed passageway with very little in the way of stooping or obstructions. The one obstruction that we did come across was a small puddle that we had to duck down to cross. Jason said when he first got there it was knee deep. We all got wet feet. Upon the return journey we broke the plug on this puddle and its has now dropped to just below ankle deep. After this another couple of pitches and passageway led us to a big pitch into a large hall. At the top of this pitch is where the PDA ran out of battery so we stopped surveying. Whilst waiting for Jason to bolt down the pitch, a lot of chatting happened. One of the more notable comments was from AG who said ‘why did we spend all that time digging?’ Jason did a sterling job of the bolting on the large pitch, putting several rebelays in place to keep us all out of the water. At the bottom of this pitch a ledge was reached, followed by another short drop of a laser calibrated Bob’s arm length of 17m. The rope reached, so we assumed this was correct. A quick potter around the chamber to take in its size led us on to a rift passage and another short pitch. We left it there, having run out of drill battery at the top of the short pitch. 2 hours saw us all back at the surface, with a nice walk back to the road in the dusk. Toby was contacted and we watched the stars whilst waiting. A good end