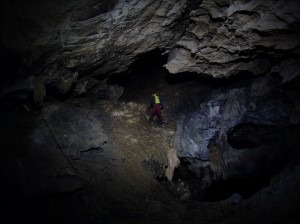 A leisurely morning was spent packing, avoiding leaving and, for some, three breakfasts.  Eventually everything was packed and excuses had run out.  The 500m descent down the gorge was its usual enjoyable self but due to the time of year a lot less tree cover, meaning we could see a lot more of the cliff sides and panoramic views.

However all too soon we arrived at the bottom.  Gareth had already pumped the dinghy up, so no further procrastination allowed.  Into the cave at 15.30.  Promptly I decided I didn’t want to be there… I’m convinced the entrance series gets harder each year.  It’s dark, water thundering about everywhere and seems to take forever to get anywhere.  Water levels up slightly, but traverse line still up across waterfall, with only one slight wear point.  I decided to clip in for safety, and promptly fell in head first, great cold and wet right at the start.  Thankfully BJ did exactly the same so I didn’t feel totally stupid.

A lot of teamwork required to get our rather large tackle bags up and down the climbs but slowly we made progress.  At Clapham Junction equipment was left in situ (waterproof first aid, 4 man bothy, 1 AV tackle bag) as this point is the most suitable to sit out a flood in the entrance series.  The rescue kit is usually a bit more comforting, but we couldn’t carry everything this time round. 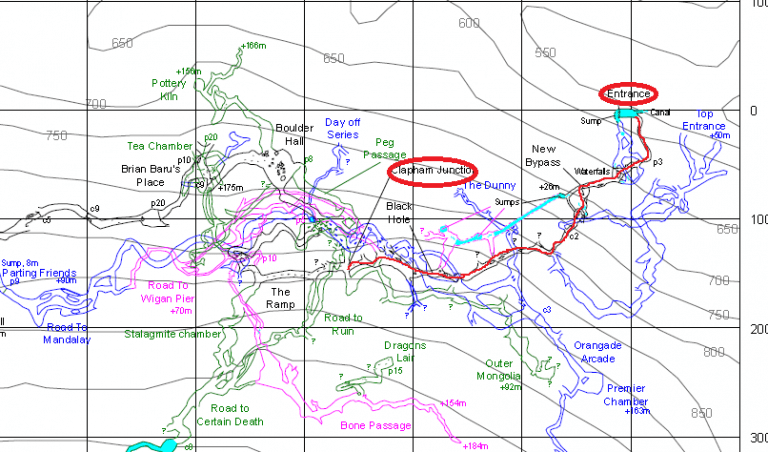 The character of the cave starts to change now, starting with The Ramp, a 70m steep climb, generally at a 45 degree angle.  More up and down climbs, continue until Boulder Hall, a large chamber. At the top of the chamber a few more climbs up lead to a 22m pitch, dropping down to the start of a large impressive passage that steeply rises up via a number of up pitches.  Normally, you start to hear a roaring noise, that sounds like water, but is the rushing of air through a constriction.  This time it’s ominously silent… If I’m lucky it’s blocked and we can turn around and go home.  No such luck and we continue down through The Hole in the Wall and more climbs up before we reach the Sump.  Water levels are normal and we chain up the five tackle bags and quickly pull them through so we don’t spend anymore time that strictly necessary in the water. 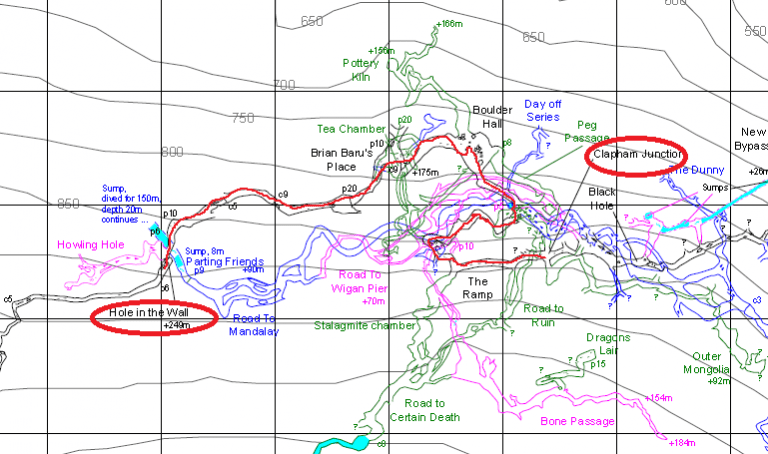 Normally my spirits would start to lift as we are getting close to Consort Hall, one of the old underground camps, however as our main objectives are in the Death Race 2000 area, camps further in have become the norm and now Consort Hall just reminds me that we are still only a third of the way into the cave!  We stop for some lunch (at 8pm) before carrying on.

The next hour and a half of caving is probably some of the nicest passage in the cave, big and dry with lots of old formations.  This is soon forgotten at the next set of down pitches, from the top of Dan’s Big Room a series of muddy pitches, prove both frustrating and unnerving in equal measure.  The ropes were placed on the 2011 expedition and have become more and more muddy and fast, plus all personal equipment is now of the same mud colour, so clipping into the right rope becomes a critical requirement.

At the bottom of the pitches The Hall of the Green Domino provides a definite landmark for the start of the next challenge… Death Race 2000 is now approx. 250m above us, up the aptly named Beasts Ramp, Satan’s Ramp and Hellsmouth.

By now I’m feeling pretty tired, those training days at the spa and facial massages seem to have been the wrong choice, maybe more caving would have been the better option.  However, once more my spirits are lifted, BJ looks positively white and slumped in the corner.  He might be feeling worse than me.  Chris, of course, looks like he only started the trip 5 minutes ago.

By now we have sent Gareth and Hannah on to Death Race, the only water source in the area is down a broken 70m pitch that can take a couple of hours to manoeuvre water carriers up.  We are all going to be dehydrated and wanting food later and in the morning, so it seems a sensible idea to do it now rather than post sleep…

These ramps were first climbed in the late 80’s by members of the SWCC, all free climbed or hand bolted, a massive achievement given the scale and conditions of the climbs.  We make steady progress up the ramps, again the condition of the ropes leaving a lot to be desired, either muddy, super fast, super thick or, in one case, a dynamic rope meeting back to 1987, that was found a few years back and put back into service (really needs replacing!) 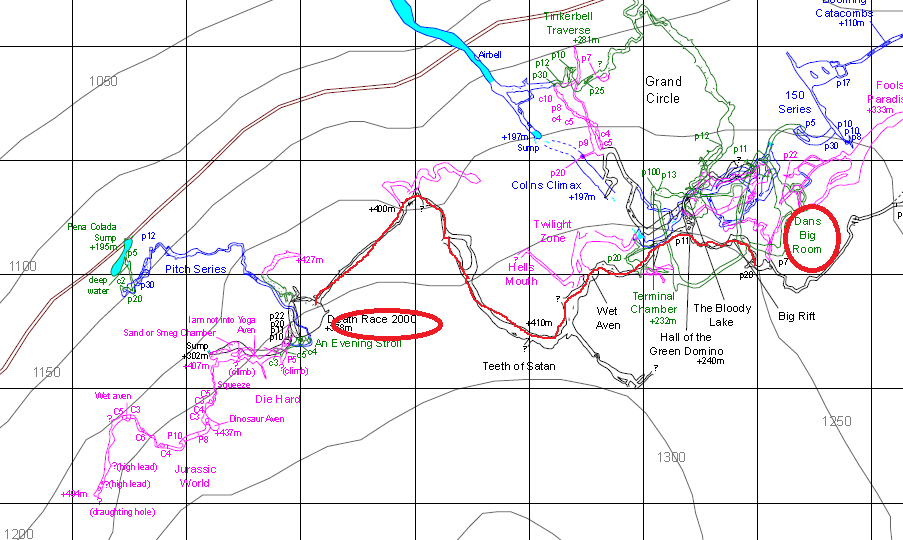 Finally the pitches up stop and we are back on relatively flat land.  It’s been a few years since I was last in the Death Race area and only small parts look familiar.  A few navigation issues delay us slightly but soon we can hear voices in the distance.  We reach The Death Race chamber at around 2:30am, a trip in of around 11 hours.  The kettle is already on and it’s time for as cup of tea and dinner.  Equipment is then unpacked (the reason we came) and everyone finds a comfortable place to sleep. I don’t have my usual underground camping clothes this time round, but a rather haphazard collection of; base-layers (20 years old), woolly hat (found in gym), bin bags (for wet feet) and a pair of Ron Hill trousers, which should only see the light of day, if that light is down a cave.