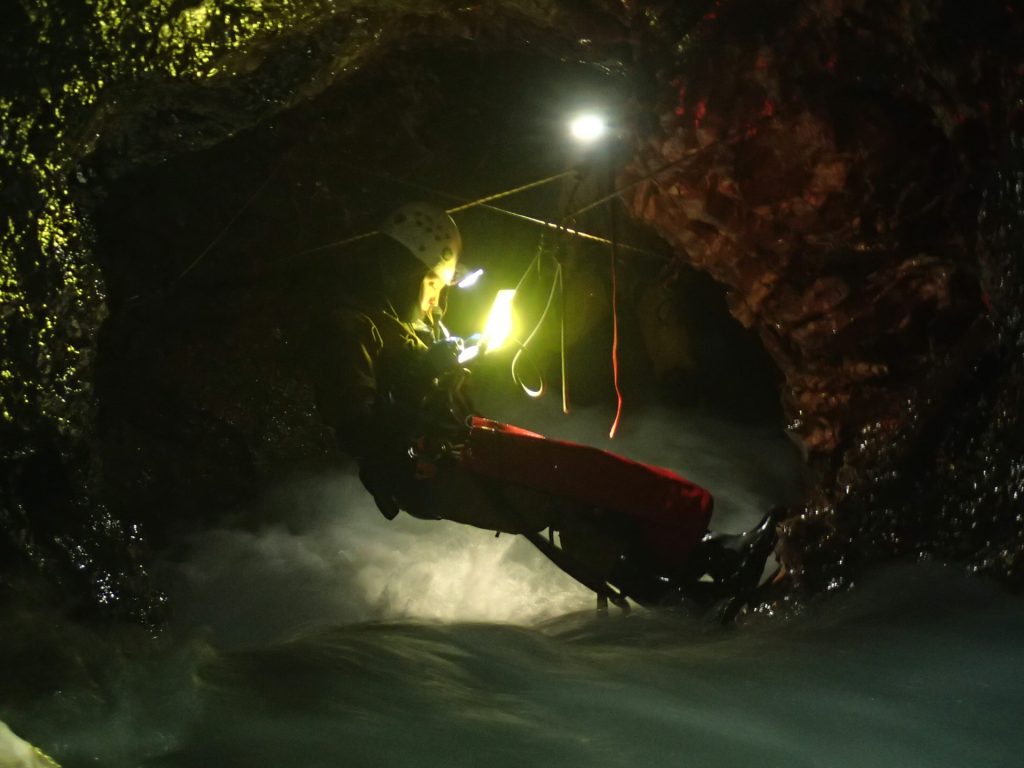 A distinct lack of enthusiasm from people for writing up the expedition….. A post trip summary follows:

The Tresviso expedition returned back to the UK last week and the following is a brief summary:

In the entrance series of Nacimiento is an area called the Road to Wigan Pier and at the end if a waterfall climb to the Parting Friends sump.  This was originally discovered in the late 80’s and later dived by Gavin Newman / Phil Short, during the filming of ‘Extreme Lives – Road to Certain Death’.  Unfortunately, no survey exists, but the sump was described as around 150m, still continuing and, unlike a lot of the other sumps in Nacimiento, was not at depth.

It took nearly 4 days to rig the stream ready for the dive.  The grade 2 survey of the approaching passage proved to be misleading… 9m up pitches, were actually preceded by 60m of steep ramps, aid traverses and bolt climbs, all while stood next to (or under) a raging torrent of water.

Eventually, all was set up and the divers, Rob Middleton and Joe Daniels, could attack the sump.

The day after the final dive, the rain came in and flooded us out of the cave for 3 days.  A lot of equipment lost and the crucial dinghy to get across the entrance lake washed away, probably now wrapped round a turbine at the hydro-electric plant.

In the upper series of Marniosa, before the streamway is encountered, is a section of cave called Extra Caverns.  Discovered in the late 70’s a number of leads and unclimbed avens exist.  Phil and Howard attacked the avens over a number of trips.  At the very far end, two small 5m avens lead to the same connection at the top (subsequently bypassed without the need for any climbing) leading to a tight rift and a draughting immature streamway.  2 further avens  (approx.. 10m) were found at the end but not attempted.

Further back in the main passage, an obvious wet aven was scaled for 10m to where it split into 3 further ‘avens’.  The left hand route led up for a further 20m to a narrowing rift, with limited potential.  The first right hand route led, after another 5m, to a tight upwards squeeze, passed by Leo to around 5m of passage and another 15m aven.  The final route from the junction leads back out of the main aven, but was only scaled for another 2-3m in poor rock, before time ran out.  This remains the most promising lead, with an obvious lip a further 5m up.

On a final surveying trip, Phil and Alastair ‘stumbled’ upon two exciting new discoveries in the upstream Marniosa streamway.  Although not shown in the 70’s survey an obvious bend in the streamway has a dark space above.  A 3m climb up lead to a huge new chamber, 50m x 20m x 20m, with a large 35m aven at one end and a high level route at the other.

Just at the bottom of the same climb up to the chamber, was a large boulder hiding a second streamway / inlet, entering the main stream.  This was pushed for around 50m and still continues.  The high level route in the chamber was revisited and extended for another 50m in large passage to a ramp down, probably into the same new streamway.

The first through trip from Silvestre Pot to Marniosa was complete by 2 teams during the expedition, before the Silvestre section was derigged – see early post for a write up.

Two sumps in the upper levels of Silvestre were dived.  Bob’s Crusade sump was dived for 32m (-6m depth) to an airbell, tight continuation possible but not appealing.  The Wet Willy sump was passed after 3m to a second sump aftetr 40m of passage.  Sump 2 is largely ‘organic’ and was abandoned after 2m.